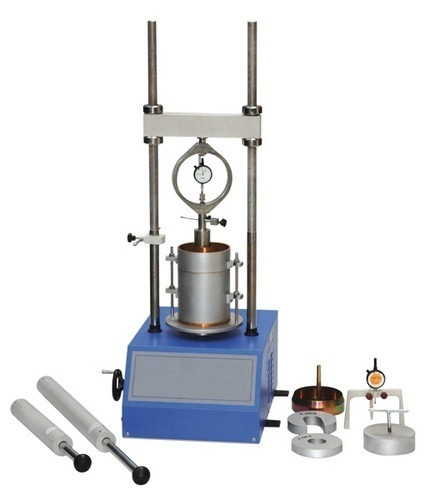 (a) On undisturbed specimen

Undisturbed specimen is obtained by fitting to the mould, the steel cutting edge of 150 mm internal diameter and pushing the mould as gently as possible into the ground. When the mould is sufficiently full of soil, it shall be removed by under digging. The top and bottom surfaces are then trimmed flat so as to give the required length of specimen.

(b) On remoulded Specimens

The material used in the remoulded specimen should all pass through a 19 mm IS sieve. Allowance for larger material may be made by replacing it by an equal amount of material which passes a 19 mm sieve but is retained on a 4.75 mm IS sieve. This procedure is not satisfactory if the size of the soil particles is predominantly greater than 19 mm. The specimen may be compacted statically or dynamically.

A. Compaction by Static Method

The mass of the wet soil at the required moisture content to give the desired density when occupying the standard specimen volume in the mould is calculated. A batch of soil is thoroughly mixed with water to give the required water content. The correct mass of the moist soil is placed in the mould and compaction obtained by pressing in displacer disc, a filter paper being placed between the disc & soil.

B. Compaction by Dynamic Method

(following IS: 2720, Part-7 for light compaction or IS: 2720, Part-8 for heavy
compaction)
For dynamic compaction, a representative sample of soil weighing approximately 4.5 kg or more for fine grained soils and 5.5 kg or more for granular soil shall be taken and mixed thoroughly with water. If the soil is to be compacted to the Maximum dry density (MDD) at the Optimum moisture content (OMC) determined in accordance with light compaction or heavy compaction, the exact mass of soil required is to be taken and the necessary quantity of water added so that the moisture content of soil sample is equal to the determined OMC. The mould with extension collar attached is clamped to the base plate. The spacer disc is inserted over the base plate and a disc of coarse filter paper placed on the top of the spacer disc. The soil water mixture is compacted into the mould of 150mm diameter in accordance with the methods specified in light compaction test or heavy compaction test.

The mould containing the specimen with the base plate in position but the top face exposed is placed on the lower plate of the testing machine.
1. Surcharge weights, sufficient to produce an intensity of loading equal to the weight of the base material and pavement is placed on the specimen.
2. To prevent upheaval of soil into the hole of the surcharge weights, 2.5 kg annular weight is placed on the soil surface prior to seating the penetration plunger after which the remainder of the surcharge weight is placed.
3. The plunger is to be seated under a load of 4 kg so that full contact is established between the surface of the specimen and the plunger.
4. The dial gauge for stress and dial gauge for strain are then set to zero. Load is applied to the penetration plunger so that the penetration is approximately 1.25 mm per minute.
5. Readings of the load are taken at penetrations of 0.0, 0.5, 1.0, 1.5, 2.0, 2.5, 4.0, 5.0, 7.5, 10.0 and 12.5 mm respectively.
6. The plunger is then raised and the mould detached from the loading equipment.

The CBR values are usually calculated from graph corresponding to penetration of 2.5 mm and 5 mm considering the proving ring multiplying factor for different load values and the strain dial gauge readings for penetration values. The CBR value is reported correct to the first decimal place.
A sample load vs. penetration curve for no correction is given for example: here load value given in psi and penetration is given by inch. 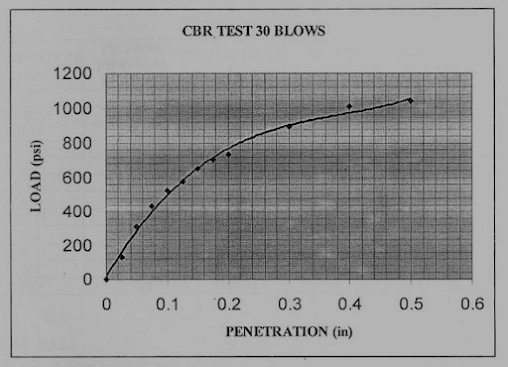 Load vs. Penetration graph for CBR test
Sample test results are given below where corrections for origin position in the graph are needed 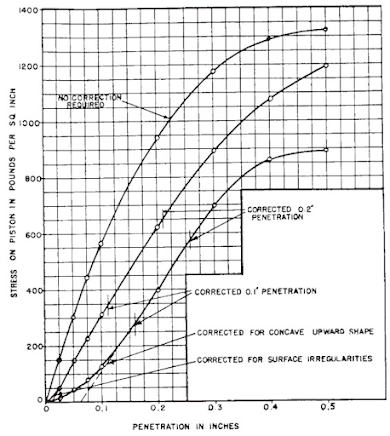