The underlying principle of assessing the quality of concrete is that, for ‘Good’ concrete in terms of density, homogeneity velocities are more than that of ‘weak’ concrete containing imperfection/voids/porosity etc. In order to examine and evaluate the conditions of in-situ concrete the structural investigation shall primarily require assessment of homogeneity of concrete in terms of compactness, absence of voids or discontinuity using equipment capable of providing in situ determination of quality in terms of above referred requirement by propagation of pulse through the concrete medium. Ultrasonic pulse velocity (UPV) test is basically a wave propagation test and consists of transmitting ultra sonic pulse of 50-60 kHz frequency through a concrete medium and measuring the travel time of ultrasonic pulses for known or measured length based on which velocity is computed.

The pulse velocity in a material depends on its density and its elastic properties, which in turn are related to the quality of materials. Transducers with natural frequencies between 20 kHz and 150 kHz are available. However, with low frequency, the wave length is large and small defects shall not influence the velocity. At the same time high frequency wave, say 150 kHz will not be able to travel to any long distance with measurable signal strength, due to faster loss of energy. Hence, transducer with frequency range of 50 to 60 kHz is considered most optimum for measuring concrete quality in structures and foundations. With such transducers, the UPV can be measured across concrete of thickness up to 4 to 5m. The minimum width and thickness of concrete member should be 150mm to obtain correct UPV reading since, unlike metal, concrete has heterogeneous composition.

The pulse is generated by Electro-acoustical transducer and when the pulse is induced in the medium it undergoes multiple reflections at the boundaries producing waves of different types of which Longitudinal (compressed) wave is fastest and is held by the receiver capable of measuring time in micro seconds at fixed distance. Electro-acoustical transducers produce waves primarily of this type and the same with frequencies of 54 kHz is deployed for determination of pulse velocity in subject work.

This test is covered under various Indian and International standards. For Indian standard I.S13311- Part-1 : 1992 may be referred to. Depending on accessibility of the structure to be tested, Direct, Indirect or Semi direct tests are normally conducted. Since the maximum pulse energy is transmitted at right angles to the face of the transmitter, the direct method is most reliable from the view point of transit time measurement. The indirect or semi direct method of measurement, though not as efficient due to loss in signal to some extent occurring during transmission, are used where direct reading is not possible.

To conduct pulse velocity test, portable digital type tester of PUNDIT LAB PLUS, manufactured by M/S. PROCEQ SA ZURICH, Switzerland is used. Before start of test, instrument is checked at site with the standard reference bar of pulse velocity of 20.6 microseconds, which is permanently calibrated & supplied by the manufacturer along with the equipment. For any metal of fixed metallurgical property the velocity of travel of longitudinal ultrasonic pulse wave remain constant. Unless the time sensor in the test equipment is defective, it will always indicate the value of 20.6 microseconds when the transmitter and receiver are put at opposite ends of the standard reference bar.

It is important to ensure direct contact of transmitter and receiver to the surface of concrete. Hence the concrete surface is grinded smooth and applied with a couplant of petroleum jelly before pressing the transducers on it.

For each reading the distance between the transmitter and the receiver is noted. The time in microseconds and the velocity of propagation in Km/Sec are automatically indicated by the tester. These are recorded in the field book. For indirect measurements, the average of the 5 velocities is considered and it is corrected by adding 0.5 Km/sec.

The direction in which the maximum energy is propagated is normally at right angles to the face of the transmitting transducer, it is also possible to detect pulses which have travelled through the concrete in some other direction. The receiving transducer detects the arrival of component of the pulse which arrives earliest. This is generally the leading edge of the longitudinal vibration. It is possible, therefore, to make measurements of pulse velocity by placing the two transducers in the following manners (Fig.2.2.2) 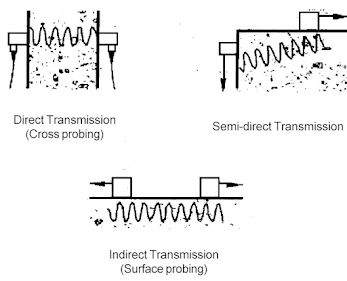 (a) Direct Transmission (on opposite faces)

This arrangement is the most preferred arrangement in which transducers are kept directly opposite to each other on opposite faces of the concrete. The transfer of energy between transducers is maximum in this arrangement. The accuracy of velocity determination is governed by the accuracy of the path length measurement. Utmost care should be  taken for accurate measurement of the same. The couplant used should be spread as thinly as possible to avoid any end effects resulting from the different velocities of pulse incouplant and concrete.

Indirect transmission should be used when only one face of the concrete is accessible (when other two arrangements are not possible). It is the least sensitive out of the three arrangements. For a given path length, the receiving transducer get signal of only about 2% or 3% of amplitude that produced by direct transmission. Furthermore, this arrangement gives pulse velocity measurements which are usually influenced by the surface concrete which is often having different composition from that below surface concrete. Therefore, the test results may not be correct representative of whole mass of concrete. The indirect velocity is invariably lower than the direct velocity on the same concrete element. This difference may vary from 5% to 20% depending on the quality of the concrete. Wherever practicable, site measurements should be made to determine this difference.
There should be adequate acoustical coupling between concrete and the face of each transducer to ensure that the ultrasonic pulses generated at the transmitting transducer should be able to pass into the concrete and detected by the receiving transducer with minimum losses. It is important to ensure that the layer of smoothing medium should be as thin as possible. Copland like petroleum jelly, grease, soft soap and kaolin/glycerol paste are used as a coupling medium between transducer and concrete.
Special transducers have been developed which impart or pick up the pulse through integral probes having 6mm diameter tips. A receiving transducer with a hemispherical tip has been found to be very successful. Other transducer configurations have also been developed to deal with special circumstances. It should be noted that a zero adjustment will almost certainly berequired when special transducers are used.

Most of the concrete surfaces are sufficiently smooth. Uneven or rough surfaces should be smoothened using carborundum stone before placing of transducers. Alternatively, a smoothing medium such as quick setting epoxy resin or plaster can also be used, but good adhesion between concrete surface and smoothing medium has to be ensured so that the pulse is propagated with minimum losses into the concrete.

Transducers are then pressed against the concrete surface and held manually. It is important that only a very thin layer of coupling medium separates the surface of the concrete from its contacting transducer. The distance between the measuring points should be accurately measured. Repeated readings of the transit time should be observed until a minimum value is obtained. Once the ultrasonic pulse impinges on the surface of the material, the maximum energy is propagated at right angle to the face of the transmitting transducers and best results are, therefore, obtained when the receiving transducer is placed on the opposite face of the concrete member known as Direct Transmission.

The pulse velocity can be measured by Direct Transmission, Semi-direct Transmission and Indirect or Surface Transmission. Normally, Direct Transmission is preferred being more reliable and standardized. (Various codes give correlation between concrete quality and pulse velocity for Direct Transmission only). The size of aggregates influences the pulse velocity measurement. The minimum path length should be 100mm for concrete in which the nominal maximum size of aggregate is 20mm or less and 150mm for aggregate size between 20mm and 40mm. Reinforcement, if present, should be avoided during pulse velocity measurements, because the pulse velocity in the reinforcing bars is usually higher than in plain concrete. This is because the pulse velocity in steel is 1.9 times of that in concrete. In certain conditions, the first pulse to arrive at the receiving transducer travels partly in concrete and partly in steel. The apparent increase in pulse velocity depends upon the proximity of the measurements to the reinforcing bars, the diameter and number of bars and their orientation with respect to the path of propagation. It is reported that the influence of reinforcement is generally small if the bar runs in the direction right angle to the pulse path for bar diameter less than12 mm. But if percentage of steel is quite high or the axis of the bars are parallel to direction of propagation, then the correction factor has to be applied to the measured values.

The aim of UPV scanning is mainly to identify weak locations possessing loss of integrity and presence of void. Therefore, the interpretation has been done primarily on this aspect. General guidelines for quality assessment on condition of concrete adopted in interpreting the U P V values as per I.S: 13311(part 1): 1992, table 2 are as follows. Velocity Criterion for Concrete Quality Grading (13311-1992)

Based on above, concrete quality grading has been assessed. This assessment of the quality of concrete is in terms of uniformity, incidence or absence of internal flaws with the allowance as permissible as per I.S 13311, for surface probing.

Estimate of Modulus of Elasticity