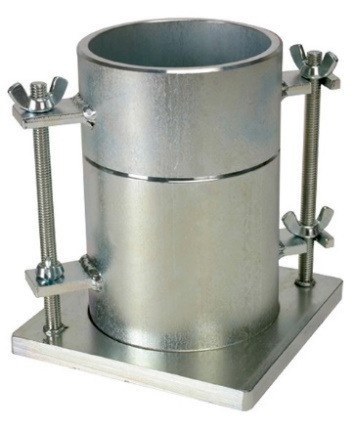 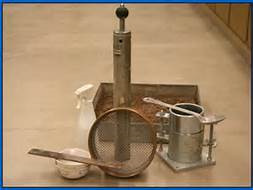 Obtain a sufficient quantity (10 kg) of air-dried soil and pulverize it. Take about 5 kg of soil passing through 19mm sieve in a mixing tray.

1. 5 Kg. of soil is taken and the water is added to it to bring its moisture content to about 4- 6 % in coarse grained soils and 8-10% in case of fine grained soils with the help of graduated cylinder

2. The mould with base plate attached is weighed to the nearest 1 gm (M1). The extension collar is to be attached with the mould.

3. Then the moist soil in the mould is compacted in three equal layers, each layer being given 25 blows from the 2.6 Kg rammer dropped from a height of 310 mm. above the soil.

4. The extension is removed and the compacted soil is levelled off carefully to the top of the mould by means of a straight edge.

6. The soil is removed from the mould and a representative soil sample is obtained water content determination.

7. Steps 3 to 6 are repeated after adding suitable amount of water to the soil in an increasing order. For sandy and gravelly soil increment of adding moisture should be of 1-2% and for clayey soil 2-4%.

Bulk density, gm in g/cm3 at each compacted specimen is calculated from the equation.

The dry density, ᵞd, in g/c.c., is calculated from the equation.

The dry densities, ᵞd obtained in a series of determinations are plotted against the corresponding moisture content. A smooth curve or by best fitted curve is then drawn through the resulting points and the position of the maximum on this curve is determined. 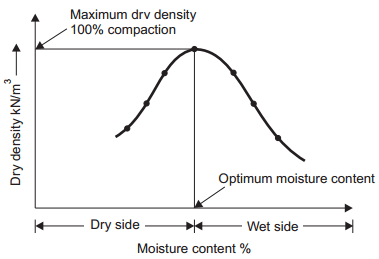 • With clays of high plasticity or where hand mixing is employed, it may be difficult to distribute the water uniformly through the air dried soil by mixing alone. It may be necessary to store the mixed sample in a silt container for a minimum period of about 16 hours before continuing with test. Adequate period about 10-15 minutes is allowed after mixing the water and before compacting into the mould.
• The blows should be uniformly distributed over the surface of each layer.